At a time when new technologies are sometimes seen as a threat, you use them in a magical way.

CLAIRE BARDAINNE: Everything is subject to prejudice, technology is no exception. It must be understood that technologies are a medium. But a particular medium, to which one can give an identity. It can not be said that there is a technological color or aesthetic. What we try to say with Adrien Mondot is that we have to transpose our identity in the technologies: we must be able to find our way back. Henceforth, if the intention is to re-enchant the real, to create sensuality and sensitivity through a voluptuous experience, it is possible. The technology is not necessarily cold, gray, square or incomprehensible.

Finally, behind technology, there are always humans, and therefore an intention. We tend to forget it, and to believe that machines take power. They may be autonomous, but at some point they have been programmed. It is this moment that gives a color or a tone.

Behind technology, there are always humans, and therefore an intention.

We tend to forget it, and to believe that machines take power.

That's why you have chosen to mix technology and dance?

C. B.: Initially, Adrien was juggling. Sometimes he says that balls give him a pretext for dancing ... Where dance is an art of movement that has no function properly speaking, juggling creates a movement around an action, a stake. At one point we wanted to juggle images rather than balls. We started to develop software that allowed us to play with virtual material, according to physical models of movement. The idea was, through mathematical equations, to materialize the way things move to apply it to graphic objects, and create something random, fluid and natural. It feels like digital land art, manipulating forces, elements, wind, snow, water.

The movement of air from Adrien M & Claire B on Vimeo.

Is there some place left for improvisation?

C. B.: We want the tools we use to have the same interpretation capacity as a dancer or an actor. In the same way that we can guide a person, we want to be able to give instructions to images. They are not recorded: everything is done in real time, they are "played" in a way, like a musical instrument. It's more fascinating, it looks alive. We feel that it is palpitating, that it is fragile. It is a very important part of  the show: we do not look at a screen, everyone must be present, focused. There is a real virtuosity in the manipulation, the audience has the impression that it is easy! It is human labor that allows this, a work of listening. The management crew is often "hidden", to leave a part of magic to the spectacle, as if everything unfolded by itself. But they know that there are people behind, and this is what gives a vertigo, the vertigo of humanity behind the technology.

Many dancers tell us that they have the sensation of dancing with an entity,

they feel a presence.

This constant interpretation imparts a unique touch to each performance ...

C. B.: It is not because we introduce a technological medium into the show that we are changing its DNA. If people come to see the show, it's for that unique touch of the moment. There can be text, a score, but what happens on stage is different every time. We want to play on this artisanal aspect of technology. Besides, we use a lot of analogue and acoustic music in our projects, with instruments that play live. This reinforces a very physical athmosphere.

How do you build a project?

C. B.: We use tools that allow us to travel between disciplines. We compose everything at the same time: music, the choreography of the dancers and that of the images. There are people with whom we have worked for a very long time. It's quite new, but we have more directors than dancers! Technique is at the heart of the artistic project, it is something we really defend. And our directors are digital interpreters. They have a score, which is written with Adrien, and they interpret it. They play music with the image ... They have a double sensitivity, they feel the pleasure of living, to take a risk. This risk must create emotion, value. For the dancers who join us, it takes a real learning time. They must learn a new language, understand it, and then speak it. Their bodies must fit into the image in order to enter it. Many of them tell us that they have the impression of dancing with an entity, they feel a presence. I am very happy: we are bringing out a kind of digital animism, a mental projection of our inner universe, which is not rational. Dancers must believe the stories that we are telling, it is the most powerful ingredient in this language to be able to convey an imaginary to the viewer.

AMCB-introduction from Adrien M & Claire B on Vimeo.

C. B.: We have two branches, which are autonomous from one another: the show and the exhibitions. With our installations, we invite the viewer to enter the setting, to play with the images, to discover them, in the way of a living organism. They are aimed at all kinds of audiences: children have no trouble understanding our systems, and older people who were afraid to discover them do so with ease. They are real visual theaters, sensations, face to which everyone is equal. Projects in virtual reality are a real incarnation: they talk to viscera, take the people by the guts. They allow them to feel space in a unique way.

THE JOURNEY OF ADRIEN MONDOT AND CLAIRE BARDAINNE

Adrien Mondot, a multidisciplinary artist, computer scientist and juggler, creates shows that involve sensitive interactions between digital, juggling, dance and music. With “Cinématique”, he won the Grand Jury Prize at the International Dance and New Technologies competition at the Bains Digital Festival in Enghien-les-Bains in June 2009. In 2010, he meets Claire Bardainne, visual artist, graphic designer and scenographer. A graduate of Estienne and Arts-Déco in Paris, her visual research focus on the link between sign, space and path, exploring the comings and goings between imagination and reality, within Studio BW, which she co-founds in 2005, or in collaboration with researchers in the sociology of the imaginary of the CEAQ (Sorbonne, Paris). In 2011, they reorganized the company which became Adrien M & Claire B.

Mirages & Miracles, a series of installations presented at the Museum of Contemporary Art in Rome (previews in March 2017 in Lyon as part of the Mirage Festival and in Rouen as part of the  Spring festival).

La neige n’a pas de sens, Subjectile, 2016. A work that gets deeper, in detail, on the meaning and the approach of Adrien Mondot and Claire Bardainne. Also available in e-book.

This article was published in issue 9 of the journal L'ADN: Les nouveaux explorateurs, in our study on new forms of governance. You can order it here. 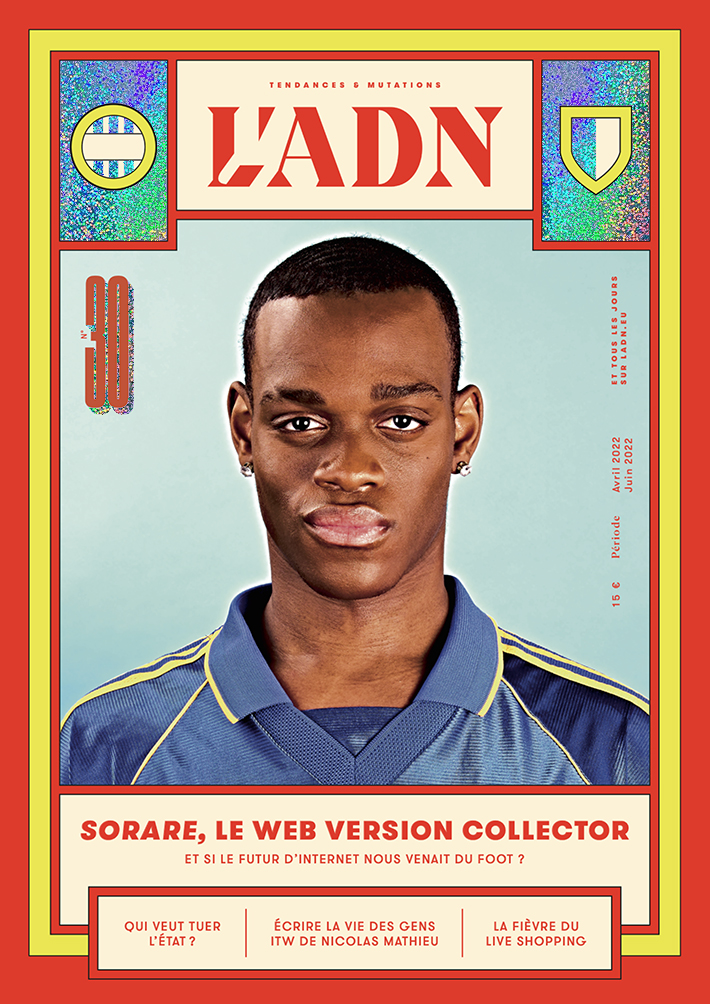